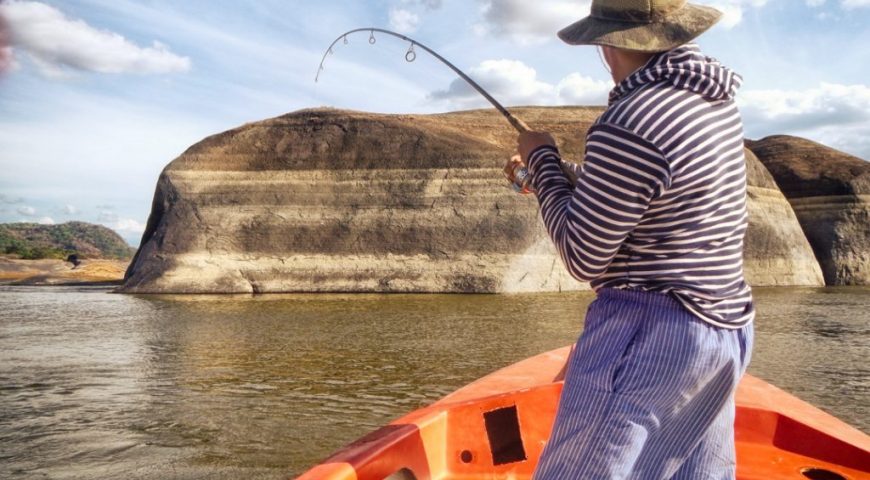 Fishing Peacock Bass on the Remote “Land of Many Waters”

Travel back in time…

When scientist and explorer Alexander von Humboldt reached Colombia at the turn of the nineteenth century, he chronicled his awe for the lush tropical terrain and powerful waterways in the present-day departments of Vichada and Guainía.

During his travels he proclaimed the Raudal de Maypures torrents in Tuparro National Park to be the “Eighth Wonder of the World,” and named the intersection of the mighty Guaviare, Orinoco and Atabapo rivers the “Fluvial Star of the South.”

Two hundred years later, one of Colombia’s most remote jungle provinces is receiving newfound attention. Guainía, which borders Venezuela and Brazil, is home to just 45,000 residents. Puerto Inírida, capital city of “the land of many waters,” is in practice only accessible to outsiders by flight.

How to get there:

Guainía has moreover taken advantage of the positive press coverage it received as the shooting location for Colombia’s first Oscar-nominated 2015 film, “The Embrace of the Serpent.” Featured prominently in the visually stunning epic are the “Crying Rocks of Mavecure.”

Machete-wielding guides lead steep hikes up the Mavicure and Mono, or “Monkey,” peaks for 360-degree panoramas of endless green trees, coffee-brown tributaries, and sand beaches. Below, golden beetles and yellow butterflies fly low to the water, its glossy surface reflecting blue skies and white clouds, interrupted only by the occasional pink and grey Amazon dolphin. Pajarito, or “Little Bird,” a 712-meter tall mound, has only been successfully summited twice.

Guainía boasts two dozen ethnic groups, the majority of which are indigenous. Upon descending the Mavecure formations, which are located in a Puinave reserve, both the El Remanso and El Venado communities offer traditional “sancocho” soup, replete with chicken, plantain, and corn, under thatched roofs.

Motorized skiffs on the 1.5-hour ride back to Inírida carefully weave through rocks. Gently bumping up and down in one’s seat, the setting sun slips above and below the thick foliage on the river banks to paint the shallows pink and red.

White egrets and squeaking bats fly through the warm air, passing by paddle canoes loaded with fresh bananas. Across the water, which begins to appear as viscous as tar, the Cerros de Mavecure become rounded silhouettes.

A brief jeep ride from the department capital, one finds a series of reddish-brown swimming holes. Alongside the refreshing depths of “The Witch’s Lagoon” are fields of the Inírida flower, a spiky burst of red and white that resembles captured fireworks.

In bloom for up to a year, the shades of these unique plants change over the months. As vacations to Guainía increased, uncontrolled picking of the 100-centimeter stems led the government to limit sales to a handful of local companies.

Mavecure is located in the southern part of Colombia’s Vichada Province. Simply put, the Mavecure region holds some of the biggest peacock bass on earth.

Fishing all sorts, types, colors and species of giant Peacock bass and the unforgettable fights, jumps and emotions the Payara shows. The majestic nature of the river, with its playful and mystical pink dolphins, giant otters, abundant reptiles, insects and birds of many species and sizes.

Other species found in the area:

Ideal trip if you use to enjoy: